It should be your aim to pass the Ontario G1 test with flying colors keeping in view the fact that you are aware of all the rules of driving, and thus, you could be a better and safe driver.
ADVERTISEMENT

Which of these vehicles can use an HOV lane even if they are only carrying one person?
All of them
Vehicles with green license plates
Airport limousines
Buses

A High-Occupancy Vehicle (HOV) lane is a special lane set up for use by certain types of vehicles with a stipulated number of occupants. HOV lane can significantly reduce the travel time for those that opt to carpool or take transit. Compared to the general traffic lane, HOV lanes can move a considerable number of people while promoting carpooling and transit use by offering reduced travel time and a more dependable trip time. HOV lanes are operational 24 hours a day, 7 days a week. 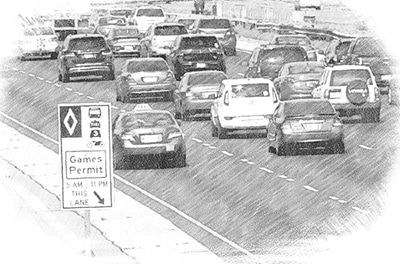 HOV lanes are beneficial not only to drivers who carpool but to all drivers. They benefit the drivers in the following ways

HOV lanes on provincial highways are set aside for vehicles with two or more occupants. It can be a driver plus one or more passengers in passenger vehicles, such as motorcycles, minivans, cars, buses, and pickup trucks.