Are you about to take the Ontario G1 Driving test? Having an idea of what you’ll encounter can make the test a smooth ride.

Controlled intersections are ones controlled by…?
Any of these
Traffic lights
Yield signs
Stop signs

What Does Controlled Intersection Mean?

Aside from acquiring your driver’s license, a driver should also be aware of the different traffic rules to avoid accidents and road problems. One of the important traffic rules you should keep in mind is the controlled intersection.

This post contains important information you should know about controlled intersections. 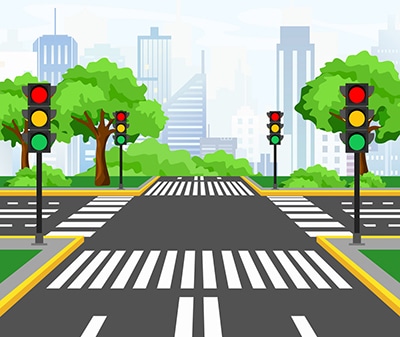 This type of intersection can help prevent accidents and make traffic flow smoother. Controlled intersections use traffic signals and road markings to indicate which direction traffic should flow at a particular time or on a specific day of the week.

The purpose of a controlled intersection is to help people understand where they’re allowed to go and where they’re not, rather than directing them to turn right on red every time they approach a stop sign.

Traffic Signals You Can Find In Controlled Intersections

Here are some of the traffic signals you can see in a controlled intersection:

Greenlight is a signal in which traffic can flow in a particular direction. When a green light is displayed, vehicles can move in the indicated direction. On an intersection, green light signals that it is safe to proceed through the intersection.

Traffic signals often come with a yellow light. This is the light that signals the beginning of the red phase. When the light turns yellow, it is almost always safe to proceed across the intersection. You shouldn’t cross the only time when the light is blinking yellow.

As traffic volumes increase, and as the number of vehicles on the road increases, so does the risk of accidents. This is especially true in the United States, which has one of the highest traffic fatality rates in the world.

One of the most fundamental ways of minimizing the risk of accidents is reducing vehicles’ speed at intersections. This can be achieved in various ways, including the use of stop signs, red lights, and other traffic control devices.