We encourage you to take it as many times as you would like or until you get a perfect score. We hope that this Ontario G1 practice test proves helpful as you study for your exam. Please visit us again and take all of our practice exams as often as you would like.
ADVERTISEMENT

In which of these circumstances is using a cell phone likely to impair your ability to remain fully in control of your vehicle?
All of them
Driving at high speed
Driving in poor weather
Driving at night

The only truly safe way to take a call on a cell phone when driving is to do what?
Pull over and park
Use a hands-free kit
Use the speakerphone
Hold the steering wheel as well as the phone

Using a handheld cell phone as you drive may result in…?
Both of these
A heavy fine
License suspension
Neither of these

Cell Phones: The Most Dangerous Things on the Road

Texting while driving might not be possible. But many drivers are using technology features such as talk-to-text. If you are such a driver, you need to stop this habit.

Not only is it dangerous to your life, but cell phone usage while driving is prohibited in Canada unless using a hands-free feature like Bluetooth or you’re in an emergency, and you need to call 911.

However, not using your smartphone for the entire trip is challenging. Many of us have made cell phones our consistent companions, and they still play an essential role in driving. For instance, drivers can use them to learn how to get to their destination, chat with a friend, or answer their questions.

However, every good thing has a disadvantage, and cell phones are not different. Statistics say that 1 out of four car accidents happens due to the driver using the phone while driving. Anything that makes a person take their eyes from the road even for a second is very dangerous. And cellphones have ranked the highest in this category.

Using your phone when driving, even hands-free puts you at higher risk of a collision. Sending text requires that you take your eyes off the road. And when you do that, you risk causing an accident.

While cell phone driving is dangerous, drunk driving is still considered more dangerous. However, the chances of causing an accident while driving using your mobile phone are six times higher than in DUI accidents.

According to statistics, texting while driving accounts for 25% of car accidents in the US. And about 1.6 million car crashes occur due to phone usage, leading to 330,00 injuries every year.

Also, note that most times, using cell phones before causing an accident is not reported due to legal issues. That means that the number of crashes and injuries could be more than this.

How to Safely Use Your Phone Will Driving 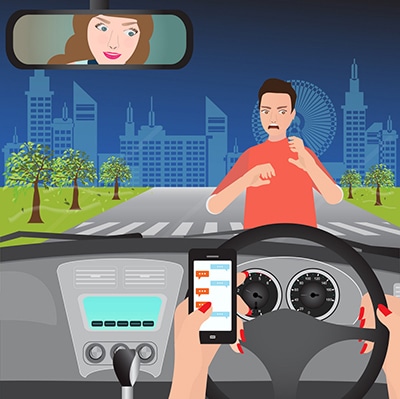 If you still insist on using your cell phone while driving, ensure that it’s attached to a radio system or any other hands-free device through Bluetooth. Please note that it’s illegal to use the microphone on your phone when driving, even if someone else is holding it for you.

But, we should mention that even these hands-free devices don’t guarantee safety. You may still be distracted by such technology and cause an accident.

The best decision is to post phone texts and calls until you reach your destination. This is essential, especially among young drivers, as statistics say they’re more likely to cause an accident by using their cell phones.

How to Stay Safe on the Road

Before hitting the road, ensure that you familiarize yourself with Canada’s laws regarding cell phone use, especially if you are a novice. Then keep yourself safe by following these rules:

If the accident didn’t occur due to your cell phone usage, you might be eligible for some compensation. These include medical bills, problems caused by stress, business loss, rehabilitation costs, and collateral damages. But make sure that you’re working with a competent lawyer who specializes in road accidents to increase your winning chances.