Try our free Ontario G1 practice test! Practice for G1 written knowledge can make the difference between passing or be failing at the test centre.
ADVERTISEMENT

If an aggressive driver starts following you, the best thing to do is…?
Drive to the nearest police station
Drive fast to escape them
Stop and find out what their problem is
Drive aggressively to make them go away

If you feel stressed when driving, what should you do?
Try to relax
Drive faster
Drive slower
Any of these

Which of these behaviours may provoke road rage?
All of them
Speeding
Failing to yield
Cutting in

You can avoid upsetting other drivers by…?
All of these
Apologising for mistakes
Showing courtesy and consideration
Planning your journey in advance

If someone else drives illegally, what should you do about it?
Leave it to the police to deal with
Follow them to their home
Retaliate with aggressive driving
Make your disapproval clear with your horn

The Dangers of Aggressive Driving and Road Rage

Perhaps you’re running late for work or an appointment and get caught in a traffic jam. Or maybe another driver cuts you off. How would you react? Driving is not without its own set of challenges, but getting angry on the road can lead to aggressive behavior, distracted driving, or even cause an accident.

What Is Road Rage? 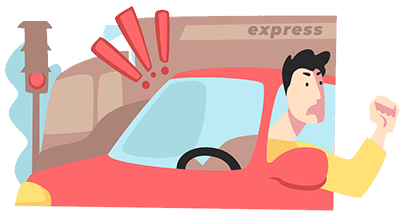 Here are some factors that often contribute to road rage or aggressive driving behavior. They include:

What Are the Dangers of Aggressive Driving?

Aggressive driving can have serious consequences for you or others, including death. Dangerous behaviors such as tailgating and cutting someone off could easily cause an accident. In fact, aggressive driving is one of the leading causes of accidents, which means that people who engage in these kinds of behaviors are putting their own lives at risk. According to a report by the AAA Foundation for Traffic Safety, aggressive driving incidents are responsible for over 218 murders and 12,610 injuries in a period of seven-year.

However, road rage and accidents that result from it can be prevented by keeping your emotions under control and being mindful of other road users. Here are tips to avoid aggressive driving:

Taking a course in defensive driving can help you stay safe on the road and could also help you qualify for discounts on car insurance!